What is a Customer Experience Survey and How Can it Help My Business?

My wife and I took a long-overdue vacation to Mexico, and stayed at an ocean-side resort over the holidays. At check-in, the desk attendant told us they would upgrade us to an ocean-side room for free. Great! We were looking forward to having a nice view. Five minutes later, he came back saying, “I’m sorry. It turns out the room is already occupied.” The result? While rationally we ended up the same, emotionally we were disappointed that we lost the opportunity for the ocean-side view. Bad data made a worse customer experience.

My immediate answer to this is no – there’s a ton of good work happening to improve customers’ experience. But that’s a qualitative response, informed largely by the great work I see our clients doing.

END_OF_DOCUMENT_TOKEN_TO_BE_REPLACED 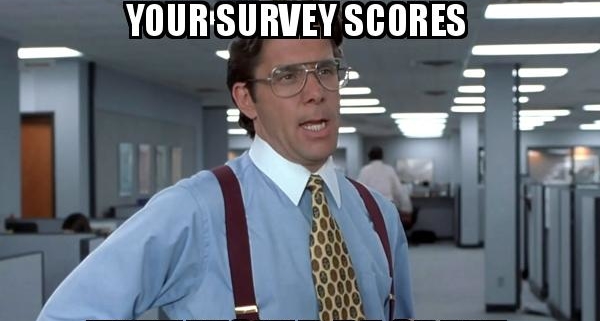 We’re early in Customer Experience (CX) capability development, and I absolutely love it! We’re discovering the best practices that our successors will take for granted; “of course that’s how you do it.”

Unfortunately, being in this early stage means that some “best practices” aren’t. Some actually hinder the goal of improved CX – to create loyal customers who love your brand and come back time and again. 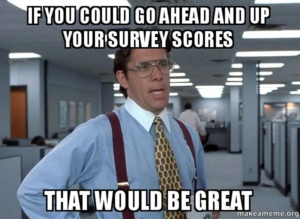 One “best practice” that can create a terrible customer experience is paying employees to achieve good NPS, or Customer Satisfaction, scores. This needs to stop.

END_OF_DOCUMENT_TOKEN_TO_BE_REPLACED 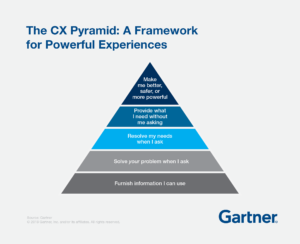 Last week I discussed Gartner’s CX Pyramid and its approach to evaluating your customer experience. Yesterday’s post discussed how to use journey mapping to help you move up the first three levels. Today, I’ll talk about using journey mapping to move to the top of the pyramid – the Proactive and Evolution levels.

Getting to these levels requires significantly more investment in both customer insights and design. Interviews – particularly in-person at your customer’s site – are good ways to help you in the lower stages, but here it requires deeper methodologies to truly understand your customers’ needs. END_OF_DOCUMENT_TOKEN_TO_BE_REPLACED

Last week I wrote about the Gartner CX Pyramid, an interesting maturity model. This week I’ll go into how to use journey mapping best practices to move up the model based on Gartner’s description of the model on their public website.

Selecting the right journey mapping approach requires you to understand where you are on the model and where you aspire to be. An inaccurate assessment will create waste; attempting to create a Proactive-level approach with only a Communication-level infrastructure will be expensive and ultimately frustrate customers instead of creating loyalty. Similarly, using a lower-level approach won’t have sufficient impact with higher-level design capabilities. Journey mapping doesn’t exist in a vacuum – it requires enough staffing and leadership to implement the changes that come out of it. END_OF_DOCUMENT_TOKEN_TO_BE_REPLACED

There are a ton of journey mapping tools out there. I’m most familiar with Touchpoint Dashboard, but I’ve had demos from many others. They all excel at certain components of journey mapping, but they don’t (and probably can’t) address some of the largest problems.

That’s because the biggest reasons journey maps fail have nothing to do with digital problems; they’re analog. As we’ll discuss tomorrow, the biggest problem in journey mapping is that it’s done in silos. Small teams are created to do journey mapping. Those small teams intimately learn the customer experience, but because they don’t control the critical touch points, the effort fails to drive change.

END_OF_DOCUMENT_TOKEN_TO_BE_REPLACED

What is journey mapping?

That may seem like a strange question from a blogger whose title is “Mapper-In-Chief,” but there’s so much confusion on the topic that it’s a question that needs to be asked.

This confusion is fueled by vendors who offer “journey mapping workshops.” This is a half- or full-day workshop where you gather a bunch of employees who each adopt a customer persona and use Post-It Notes to document your perceptions of that customer’s journey. Oracle hosts this type of workshop, and by all accounts it’s a ton of fun. It’s possible they mention the need to actually talk with customers, but the attendees I’ve spoken to don’t remember them saying that.

END_OF_DOCUMENT_TOKEN_TO_BE_REPLACED

Most journey mapping projects fail to drive change. That’s what we discovered when we surveyed practitioners who have conducted such projects (learn more about this survey in our white paper, “Driving Change Through Journey Maps”).

One leading success factor is selecting the right journey to map, and it’s the first place that problems occur because it requires trade-offs. Do you want an end-to-end map or one of a specific sub-journey?

An end-to-end map is interesting. Seeing the customers’ journey from beginning to end helps us to understand where the points of friction are and helps prioritize places where issues need to be fixed. Unfortunately, that end-to-end view isn’t always the best way to improve the customer experience.

END_OF_DOCUMENT_TOKEN_TO_BE_REPLACED

Have you taken a look at our latest whitepaper? Also accessible from the resources page, it details strategies and insights for ensuring that your next CX initiative is a successful one that will pay for itself with opportunities for profit and growth. 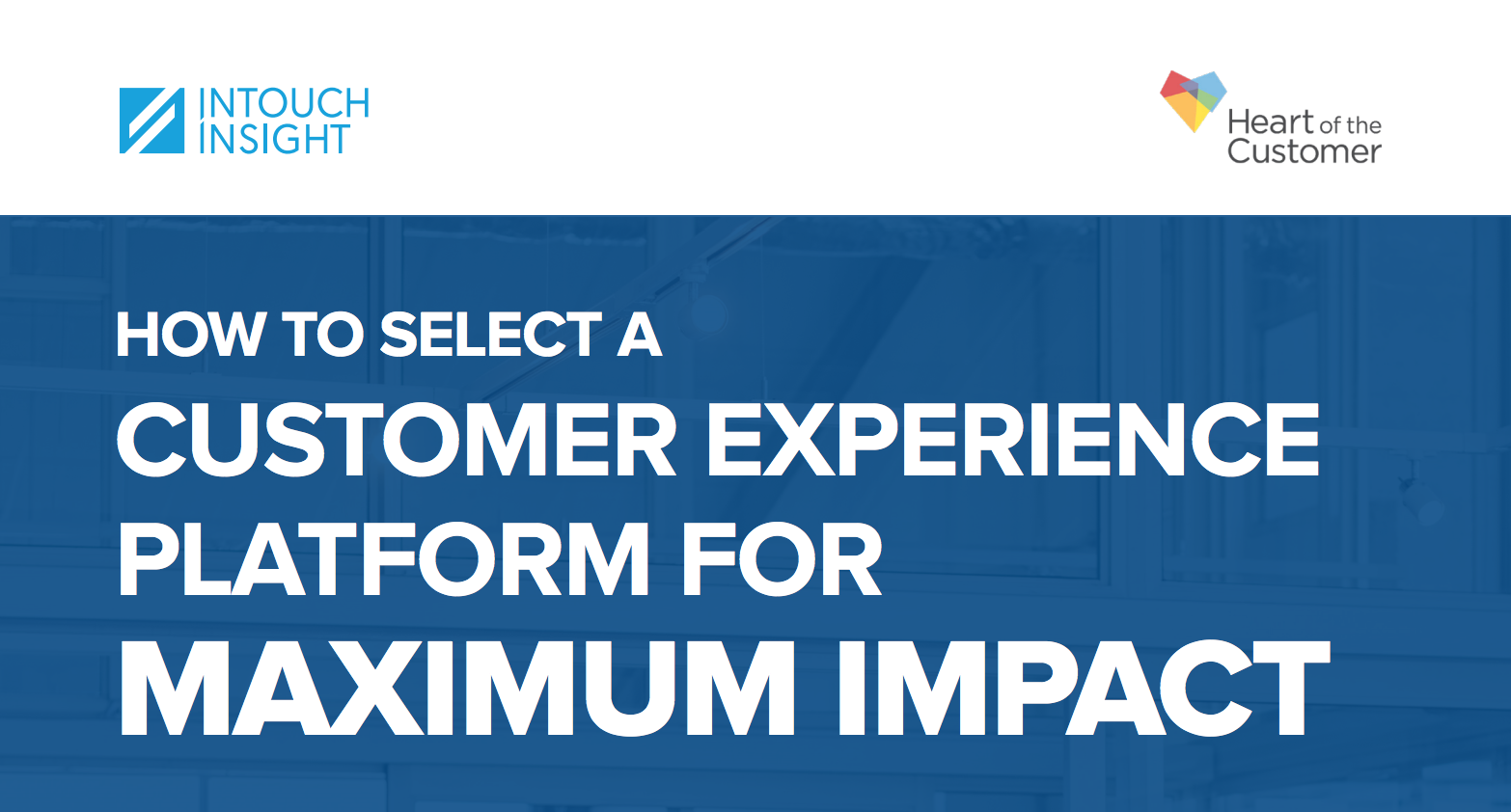 Access it here: How to Select a CX Platform for Maximum Impact 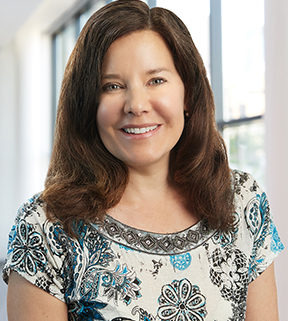 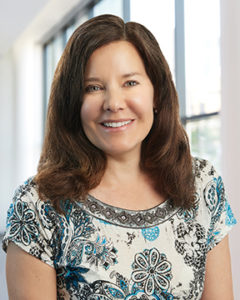 This is a guest post written by one of our very own Lead Consultants, Jean Fasching.

A friend of mine who’s new to NPS research recently shared that she was frustrated with the response rate (less than 1% of those asked) from a B2B, NPS (Net Promotor Score) question recently added to her company’s website. Executives dictated the addition as a low-cost and efficiency method to get at NPS. So, to keep it simple, she had it added as a one-question pop-up for every “n” visitor to their home page.

Continue the customer experience conversation by connecting with us or subscribing to our blog.
Followon TwitterSubscribeto RSS Feed
Followon Youtube Connect withJim

Learn more about how journey mapping can drive your customer experience program. Tell us a little about yourself to see the rest of our free Toolkit!