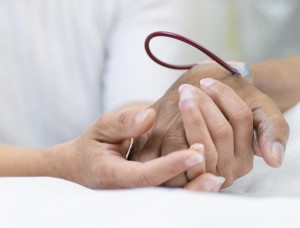 Transactional surveys are risky. With so much riding on them, there’s too much temptation to game the system – not just by front-line employees, but by managers as well.

But healthcare brings it to a whole new level. As a part of the Affordable Care Act, hospitals are judged on standardized patient experience scores (called HCAHPS, or Hospital Consumer Assessment of Healthcare Providers and Systems), with low scores having significant financial implications. And it’s really impacting healthcare – particularly those organizations with lower scores.

The reactions are interesting to watch. This article is clearly in the anti-survey camp, and it’s over the top.  As one of my clients said, “I’ve heard this over the years, but it was surprising to see it in print.”  Apparently, hospitals have to decide between letting people sleep at night and letting them get infections! One interviewee grudgingly admits that patient experience isn’t completely worthless.

This is a better article, from The Atlantic Journal, forwarded by another client. While it’s still a bit over the top (“Patients can be very satisfied and dead an hour later,”) it does suggest that some hospital leaders are gaming the system. This introduces some lessons for all of us.

Lesson #1: Don’t rely only on surveys

When people don’t like the results, the first thing they do is attack the methodology – no matter what it is. The first article uses the “I’ve heard of one hospital somewhere…” to cast doubt on the entire survey. The second argues that the survey doesn’t distinguish between medically-necessary call buttons and others. Of course, this argument ignores that all hospitals have to deal with the same issue.

We create many of our journey maps through qualitative research. When a manager’s department doesn’t come out so well, we hear a similar attack. “You only talked with 80 customers. That’s not statistically significant.”  We need to be prepared for these conversations, and use multiple forms of data to reinforce our findings. For example, working with a non-profit, when we heard this comment about our 71 focus group participants, we immediately flipped to the next slide that showed operational data that directly reinforced the focus group findings.

The second article does have a strong argument in that sicker people tend to be more satisfied. We’ve seen this same result in our research. This really isn’t an argument against measuring patient satisfaction, although it’s taken that way. But if you have multiple hospitals, and one serves a sicker population, you certainly need to take this into consideration.

This is the follow-up to #2. Unfortunately, the federal government is placing enormous pressure on the surveys, tying substantial reimbursement to patient satisfaction scores, resulting in:

Healthcare tends to be way behind the customer experience curve, using methods that most industries rejected years ago. One of these is the script. What truly makes a satisfied patient is a nurse who listens and responds. But since not all nurses are good at that, some healthcare organizations have responded by trying to enforce behavior.  And as any good call center manager will tell you, all a script does is enforce the lowest common denominator, significantly lowering the performance of your talented reps while only marginally increasing results for the bottom of the barrel.

Or take the example in the Atlantic article of the nurses being told to sell microwave meals as delicious. A decision was made to harm the patient experience (let’s microwave our meals), but participants are being told to make it a positive.

Now, don’t take me as an anti-survey fanatic.  I use surveys, and they’re powerful tools when done correctly.  But these two articles do give us clear direction on what we need to do:

Never use a survey when operational data will do. As mentioned in the articles, CMS (the government agency running this program) also tracks readmissions, preventable deaths, and other scores. Using surveys is the lazy thing to do. The better idea is to use these pieces of operational data as your true measures, and use surveys to understand what might be causing the problems.

In a retail store, bonuses should always be tied primarily to sales and shrink (theft) data. The surveys should only be used to understand why sales might be low, to help the manager improve results. The same approach is true in healthcare. Tie bonuses to healthcare outcomes, and use the surveys to understand where they may be falling flat. By doing this, we remove the artificial argument about whether patient experience matters, and get back to focusing on what’s really important: improving the health of those who place their trust in us.

Continue the customer experience conversation by connecting with us or subscribing to our blog.
Followon TwitterSubscribeto RSS Feed
Followon Youtube Connect withJim

Why is Ace Hardware trying to buy my loyalty?